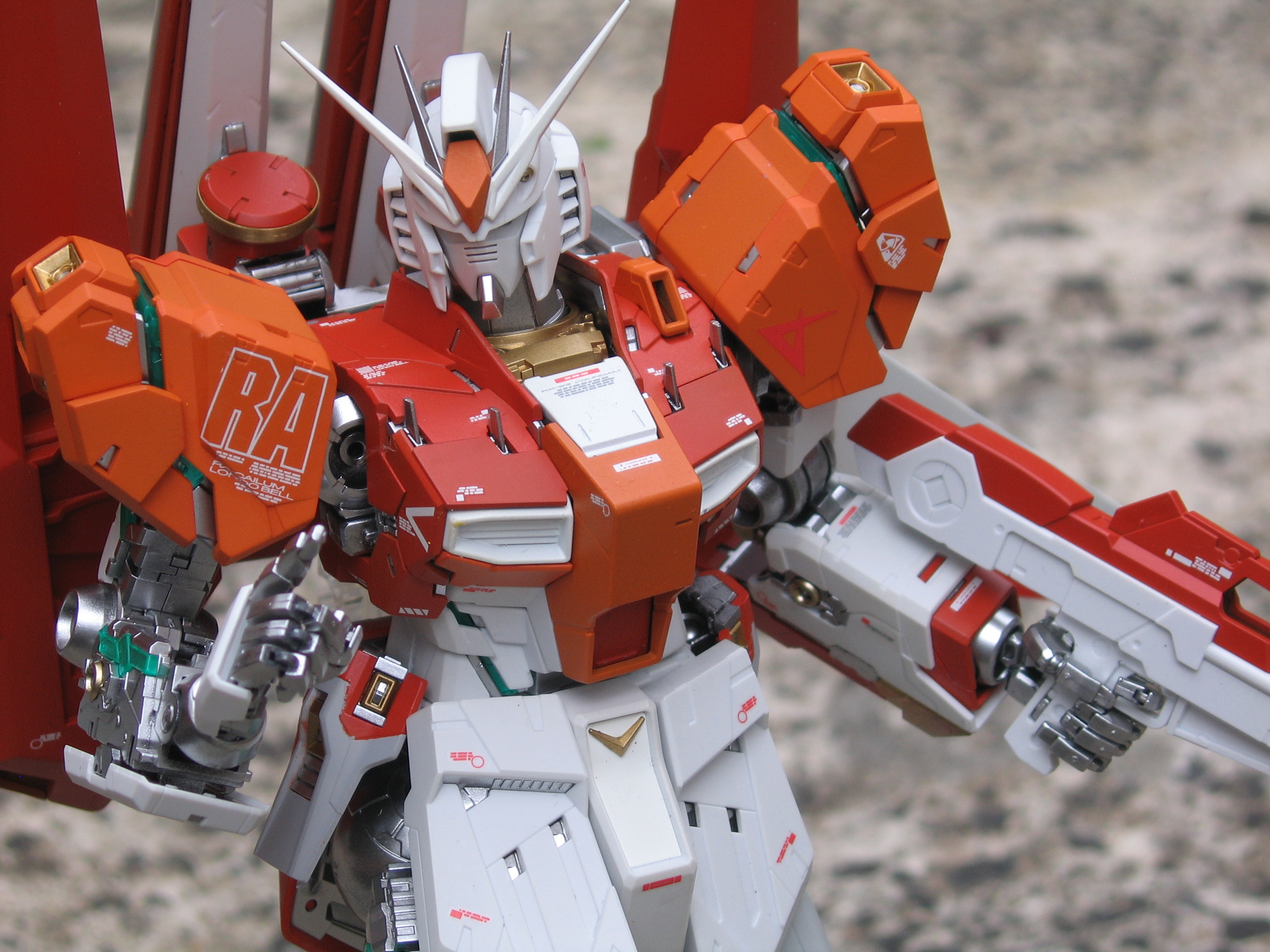 My build for Lupes’ Not Just for Show! – The Nu Gundam ver. Ka Gauntlet  over at the GAF. Go check it out, it’s awesome.

It’s entered into the Newtype category. Colour scheme inspired by Amuro’s Zeta Plus A1.

The frame on this kit is phenomenal. Frame is all done in metallic silver for this build. You’ll see an image or two of it in the gallery.
I loved the hands while building it too, but not so much now.

Also entered into the Hyperspeed category, though I’ve got to choose a pose still. 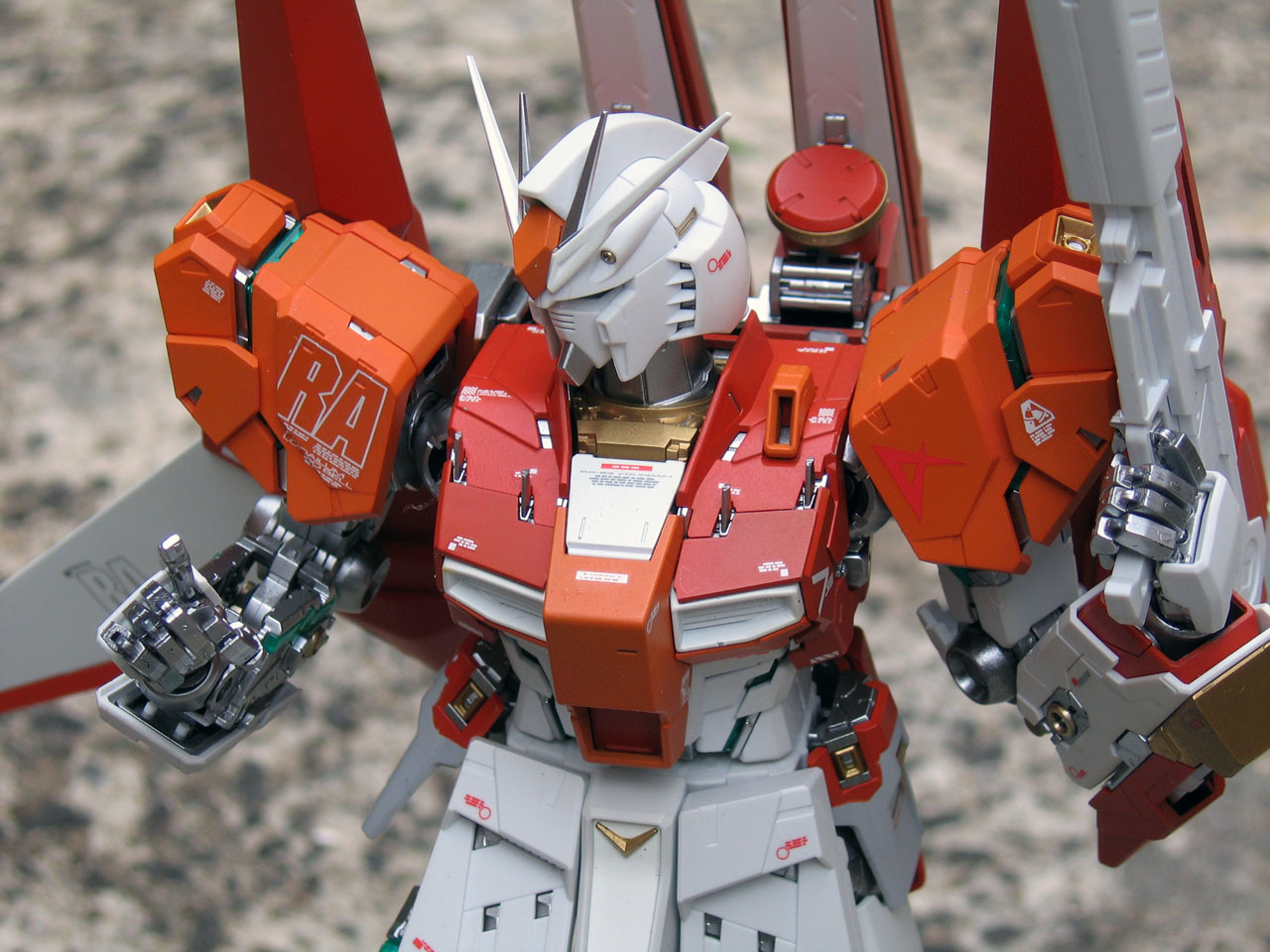 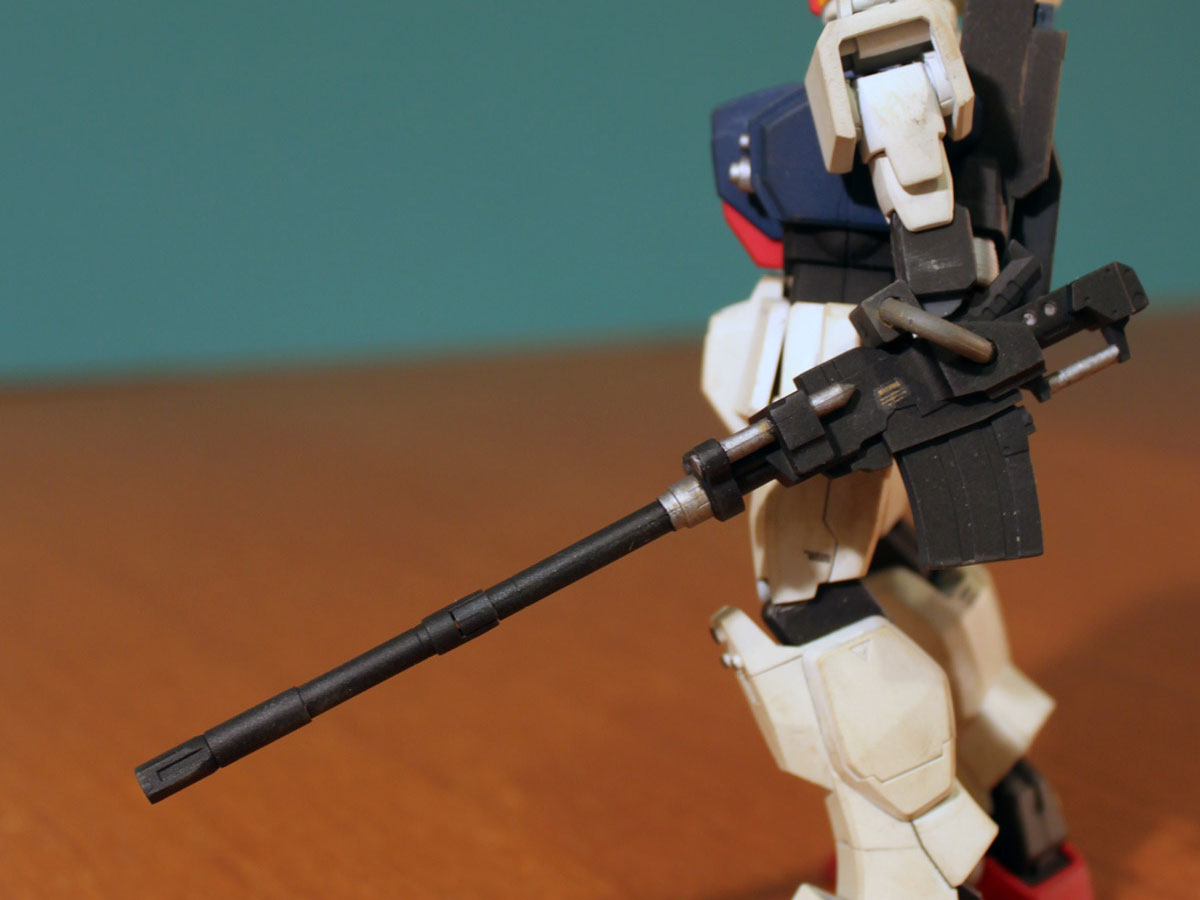 Sergeant Harry Buckworth strode into the mess-hall, “Reedy, how’s my suit? It better be finished or what’re you eatin’ for?”
Donald Reidman, Engineer First Class, sighed and dropped his fork. “It’s in better condition than this swill, that’s for sure.”
“A trashed Ball is better than that shit you’re eating.”
“Yeah, maybe it’ll evolve into a meal while I’m gone. Come on, Buck, I’ll take you to see your baby. She’s in Hanger 17.”

“Next time you run into a Zaku, Buck, you want to use your shield to block? That heat hawk trashed all the servos and connections in the left arm, it’s not salvageable.”
“You ever tried aiming a cannon and holding a shield at the same time, Reedy? It’s fuck’n hard.”
“I better warn you. We had to make a few, uh, modifications to your suit.”
“What KIND of modifications?”
“You know we’re low on spares. The left arm is gone. We’ve modified the shield to mount on your right arm.”
“Damn it Reedy, it’s hard enough to aim a cannon with two arms!”
“We’ve sorted that out for you. You wont even need to lug around the storage container anymore.”
“I don’t know if I like the sound of this.”
“Just wait, you’ll see. I think you’ll like it.”

Buck turned to Reidman as they stepped inside the hanger.
“You know, Reedy, I’ve always wondered what you guys keep in the hanger next door? There’s all sorts of rumours about it. ish about little men and all that…”
Buck froze as he saw his suit.
“Well, what do you think?”
Buck’s mouth spread into an evil grin.
“I love it.”
Buck slapped Reidman on the back.
“One thing though.”
“Yeah, Buck?”
“You better’ve kept the arm. I’ve got an idea…” 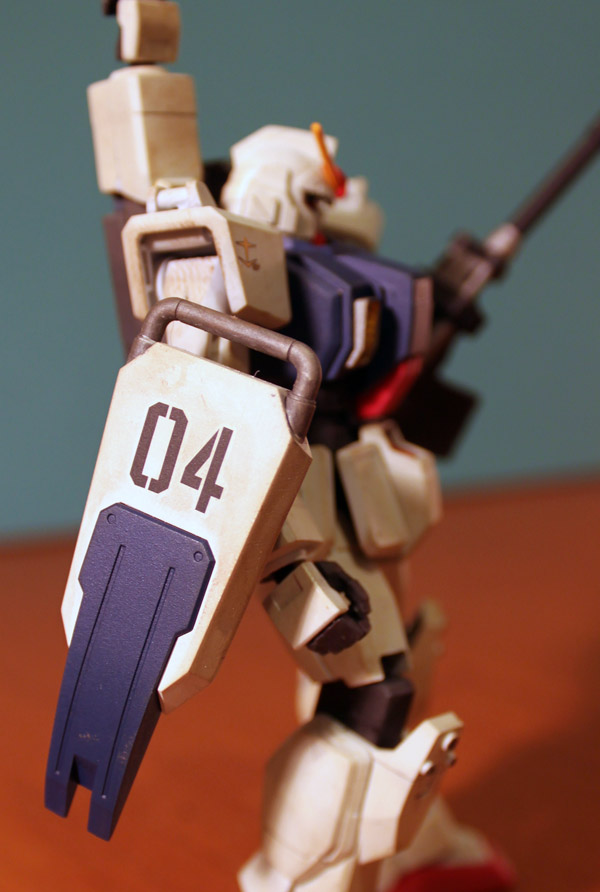 Apologies in advance for the blur-o-vision in these photos. Camerta/tripod/lighting setup are on holiday.

2011 – It started off quiet and ended with me standing knee-deep in piles of giant hailstones on Christmas Day. Inbetween that I managed to do some gunpla though.

First off, I finished snap-building the Hi-Nu. I’m a fan of this design, but I’m a fan of white and blue, so that’s a given. 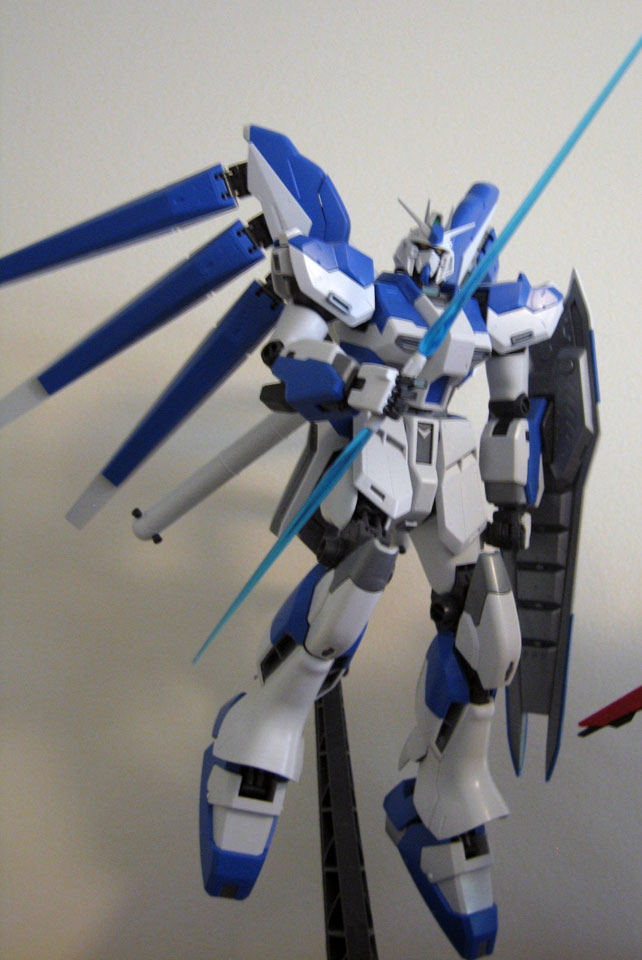 HLJ had a sale on PGs. So I got a few, and this fellow. Loved building it, hate the fact bits fall off when you look at him. Somehow he stayed together for this shot. 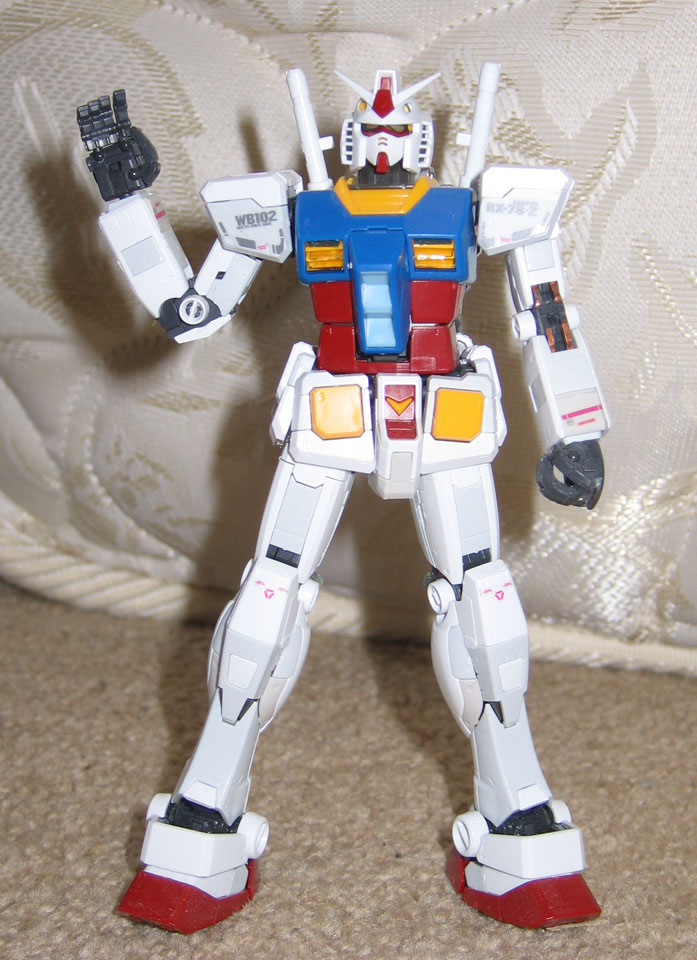 It was around this time I discovered GAF, while researching ideas and colours for my PG Strike Freedom. (’cause the normal colours are bleh). You guys are fruit loops. Seriously. You’re all great though, too.

During the build phase of the PGSF I hand-painted these two guys.

First, a MG Freedom; has a few flaws that need fixing, mostly from falling off a shelf. You can see the waist joint is a bit flopsy. 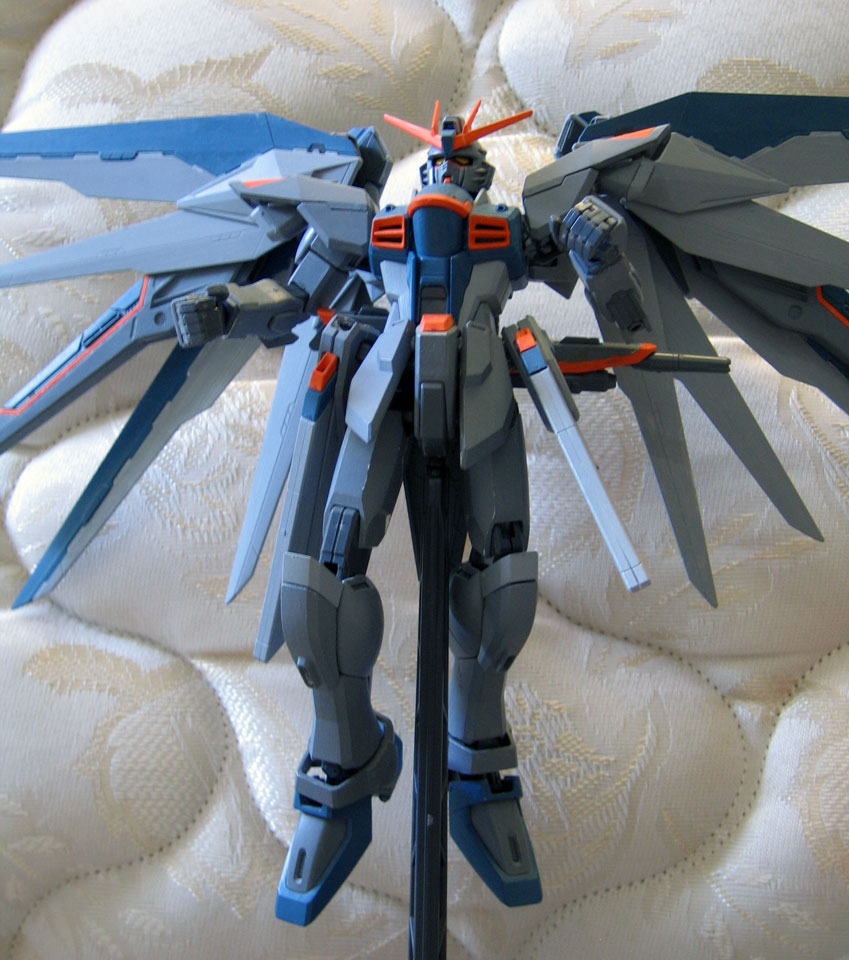 Then a MG Wing Zero ver. ka, who came together much better. 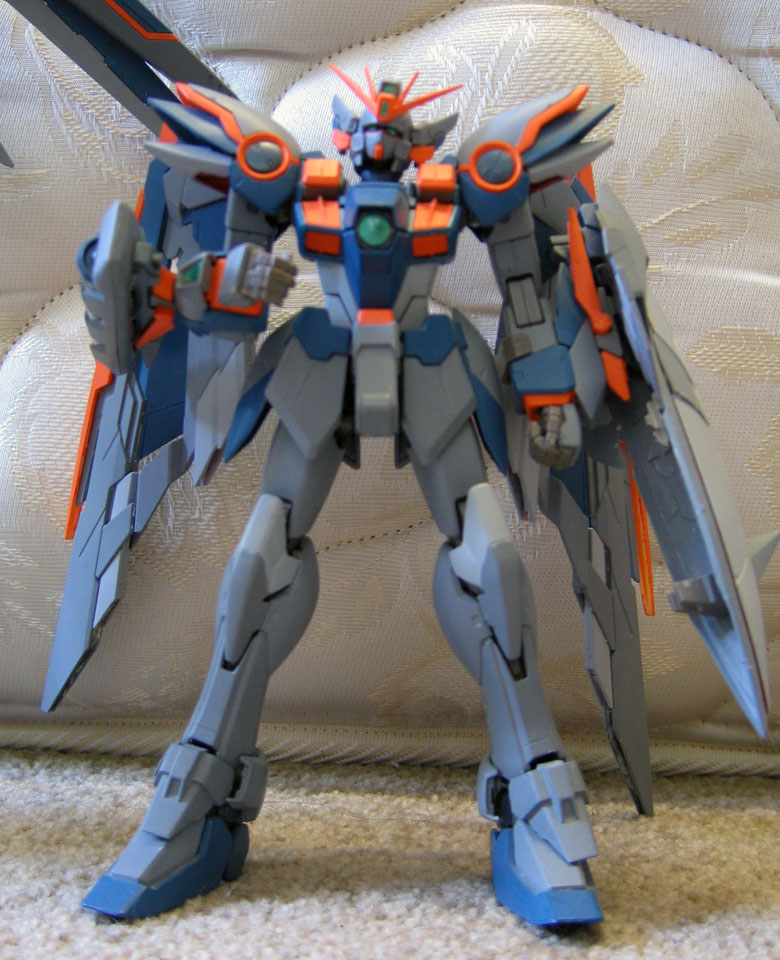 After a purchase of an airbrush, I spent the next 3 months on this bugger – my build for the Gauntlet of the Apocalypse. While taking this photo I remembered I need to finish the swords… 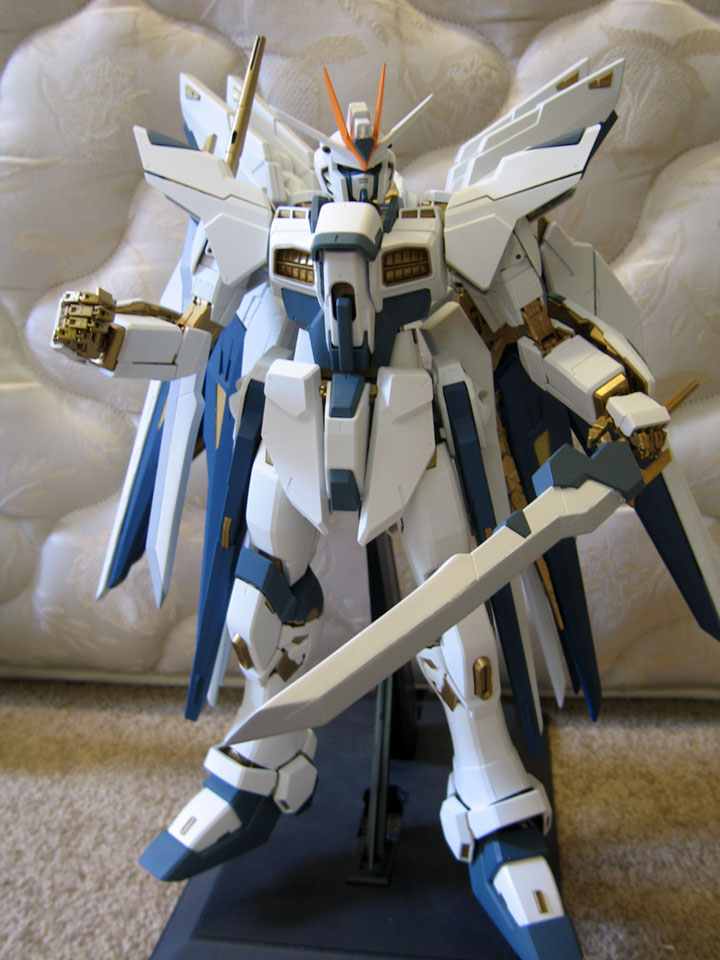 After the Gauntlet, burn out sets in, though I manage to snap a HG 00 7 Swords. I like this design a lot. 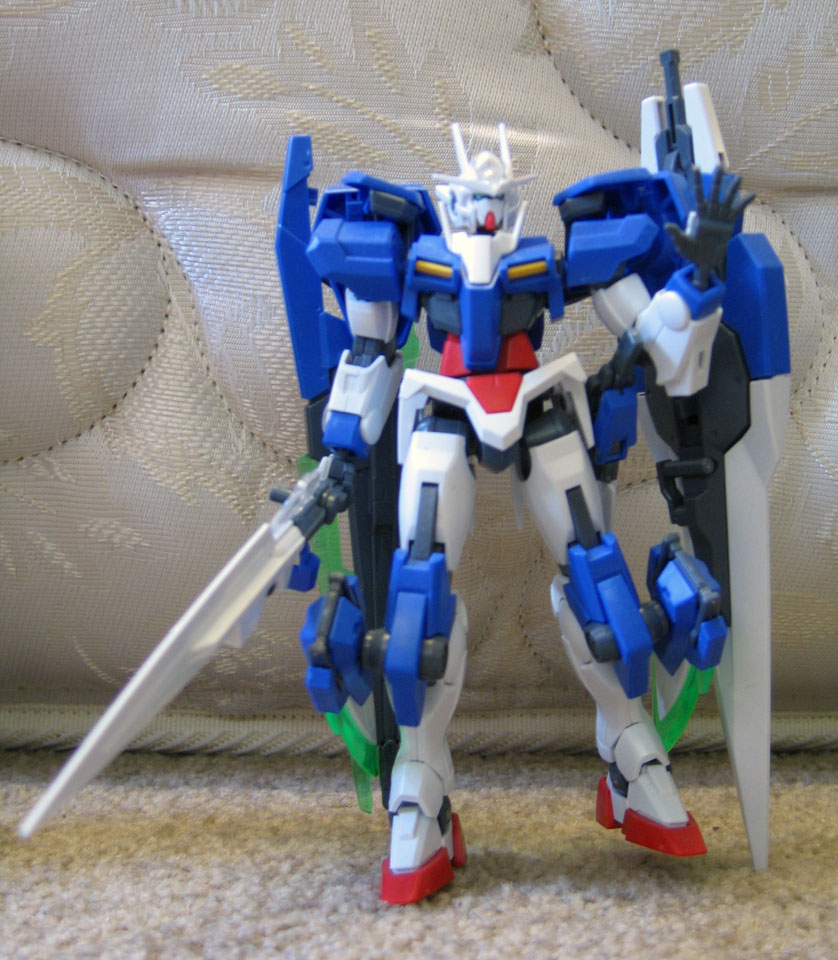 Took a break from Bandai kits and built a Kotobukiya Frame-Arms Rapiere. Painted a few of the bits that weren’t white in white to match the boxart. 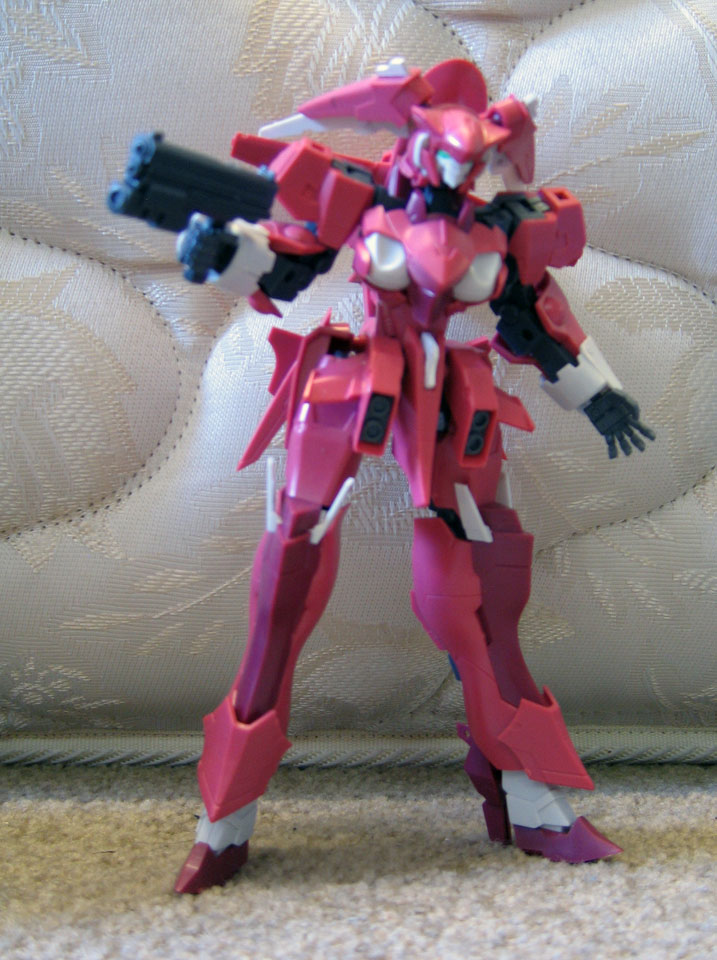 Started on my Delta Plus for the groupbuild. Glad the timeframe got extended, I would’ve missed the original deadline by a large margin. A SD Destiny that will be done in Alclad Golds and probably a white pearl for the missus. If I do things for her occasionally she lets me buy stuff! Win-win. And a bunch of other things. The GN-X is a great design, because it’s a bit different! Yes, that is a car model in there. Sssh, it’s a “secret” project. 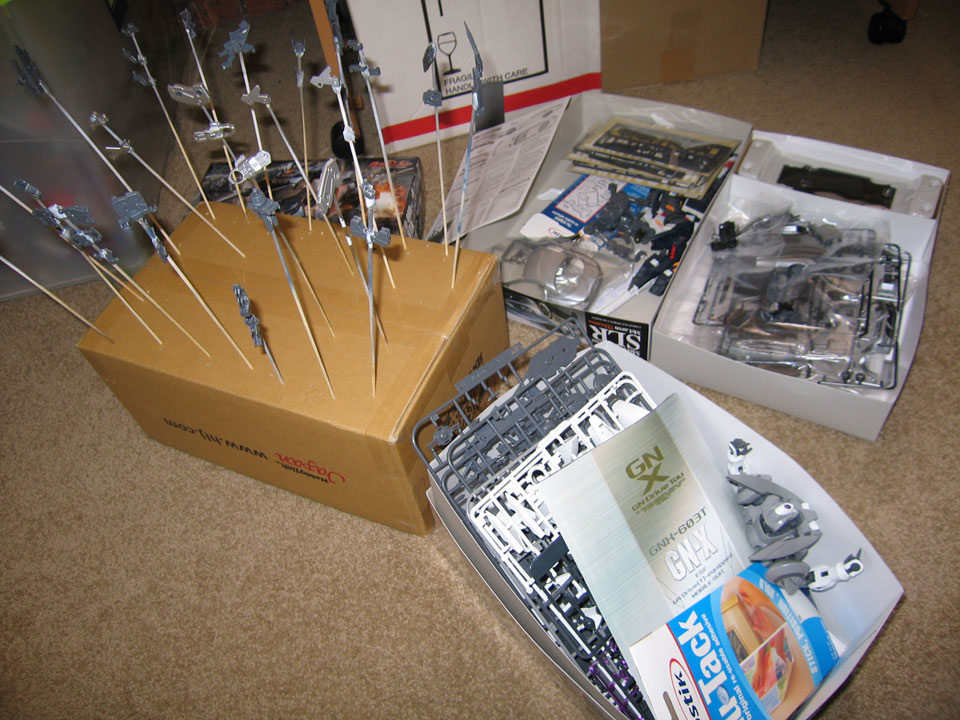 Although I didn’t build many kits this year, I couldn’t stop buying the bloody things.
Here’s my current untouched backlog. Anything I’ve actually started on isn’t there. 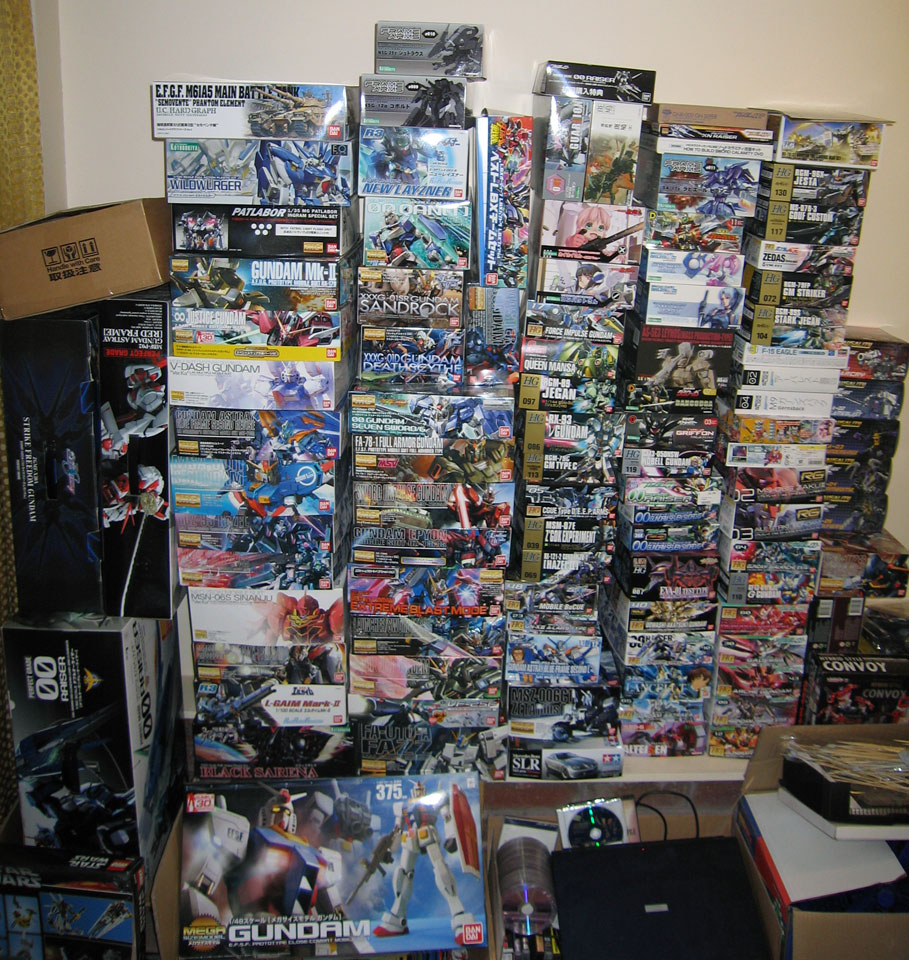 Must. Stop. Buying. The 1/48 Gundam box looks kinda small in that context…

In closing I’d like to thank Sonar and everyone from the Gundam Australia Forums for forming and being part of a great community! Here’s to a great 2012 everyone!

So, what’s next for the participants?

Lupes is working on a PG Wing Zero with about 5,000 LEDs in it. Gaigun is having a break from anything strenuous. Busterbeam is drooling over the Jesta.  ASM has surfaced from fatherhood (and snap fitted a great Nu Gundam; where did he find the time!?)

And Shaid? He’s stupidly signed up for more group builds!

I’m also planning to redesign my blog. Something more modern…